EdgeSight differentiates between the instance of an agent and the machine which the agent is installed on. The former is stored in the table called instance and the latter is found in the table called machine. The machine is mainly represented by a unique id (machid), the name (name) and the physical memory (mem_physical). Every agent instance is referenced by a unique id (instid) and lists the corresponding department (deptid), the hosting machine (machid) and the timezone (tzid). The table timezone contains all timezones expressed by a unique id (tzid) and an offset relative to the universal time convention (UTC). The handling of timezones will become a very important piece in the creation of queries as timestamps are stored in UTC and need to be converted to the local timezone.

The following image displays the relationship between the tables introduced above: 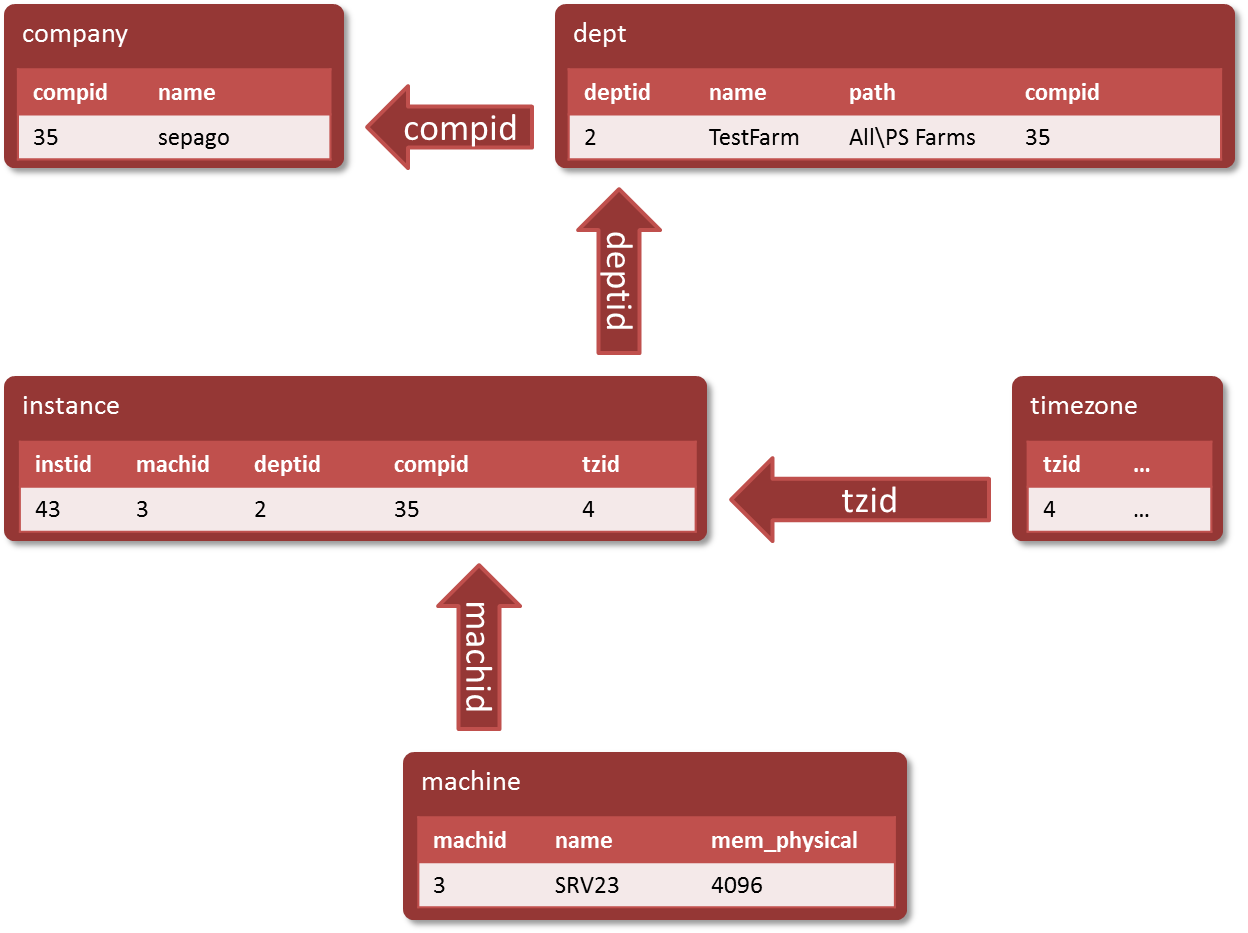 Details about the organizational tables called image and vendor will be explained in the next section as the relationship will become more obvious.

Performance data is stored in several tables depending on the type of data:

Unfortunately, these tables are not suited for analysis as fields have cryptic names. Therefore, the corresponding views should be used instead (prefixed with “vw_”).

The views for retrieving performance data have a very similar structure. They all contain a timestamp (field dtperiod) expressed in UTC, a reference to the corresponding agent instance (field instid) and a set of data items expressed by several fields:

Storing this information separately is necessary for proper statistical analysis. Don’t calculate the mean of several mean values but rather add the sums and divide it by the added number of values.

The following views follow the general schema described above:

The following image displays the relationship between the tables containing performance data. 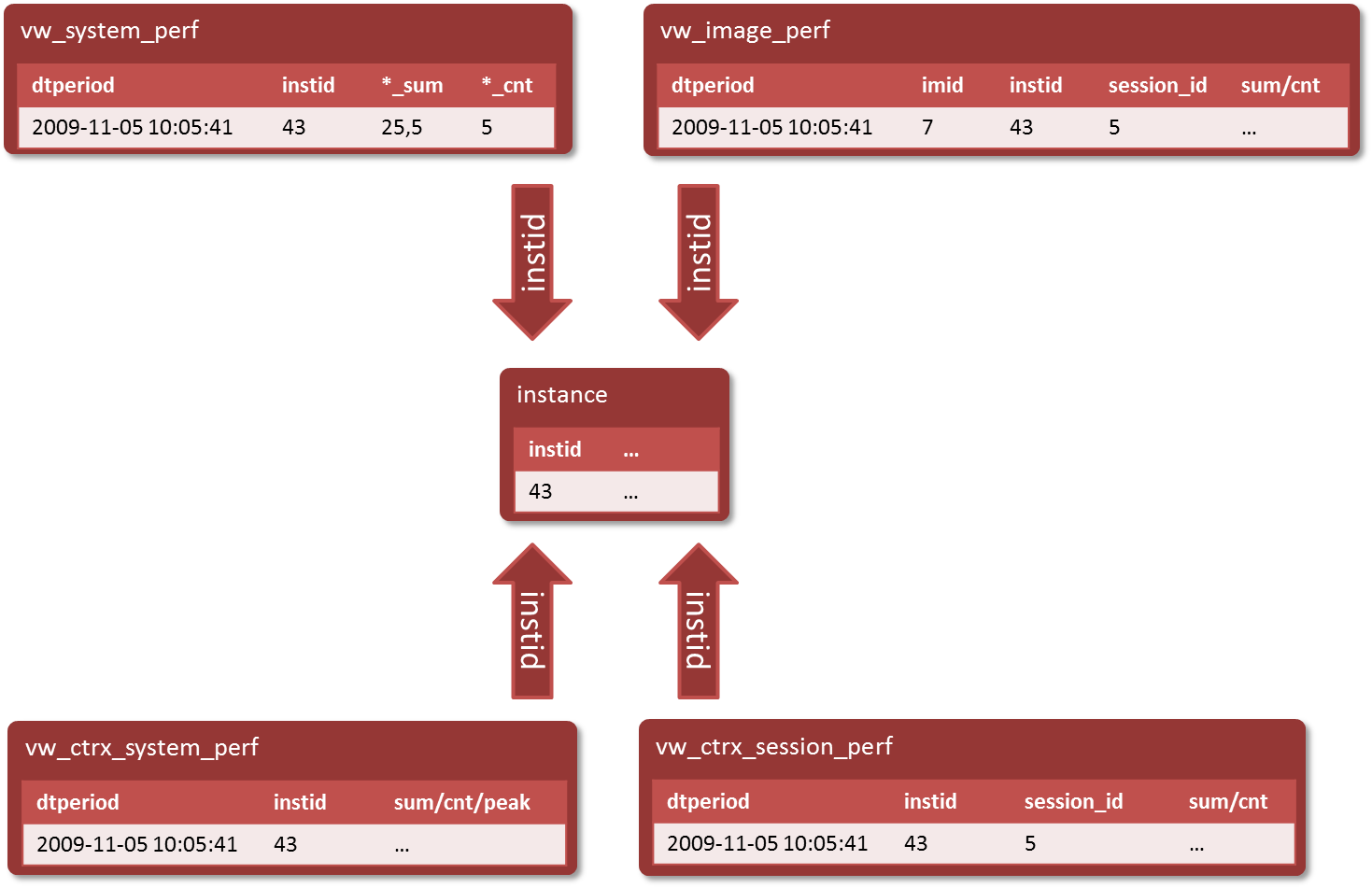 Process performance data from vw_image_perf requires two additional tables to resolve the data contained therein: image and vendor. Detailed information about processes and vendors are separated from the performance data to prevent redundant data to be stored. A process is represented by an entry in the table image encompassing a unique id (imid), the executable name (filename), the version of the file (file_version) and a reference to the vendor (vendid). A vendor is stored in the table vendor by a unique id (vendid) and a name (name). The following image displays the relationship between the tables vw_image_perf, image and vendor.

Apart from relating performance data through the agent instance (table instance), tables like vw_ctrx_session_perf contain information about individual user sessions. The following image displays the relationship between tables based on user sessions. 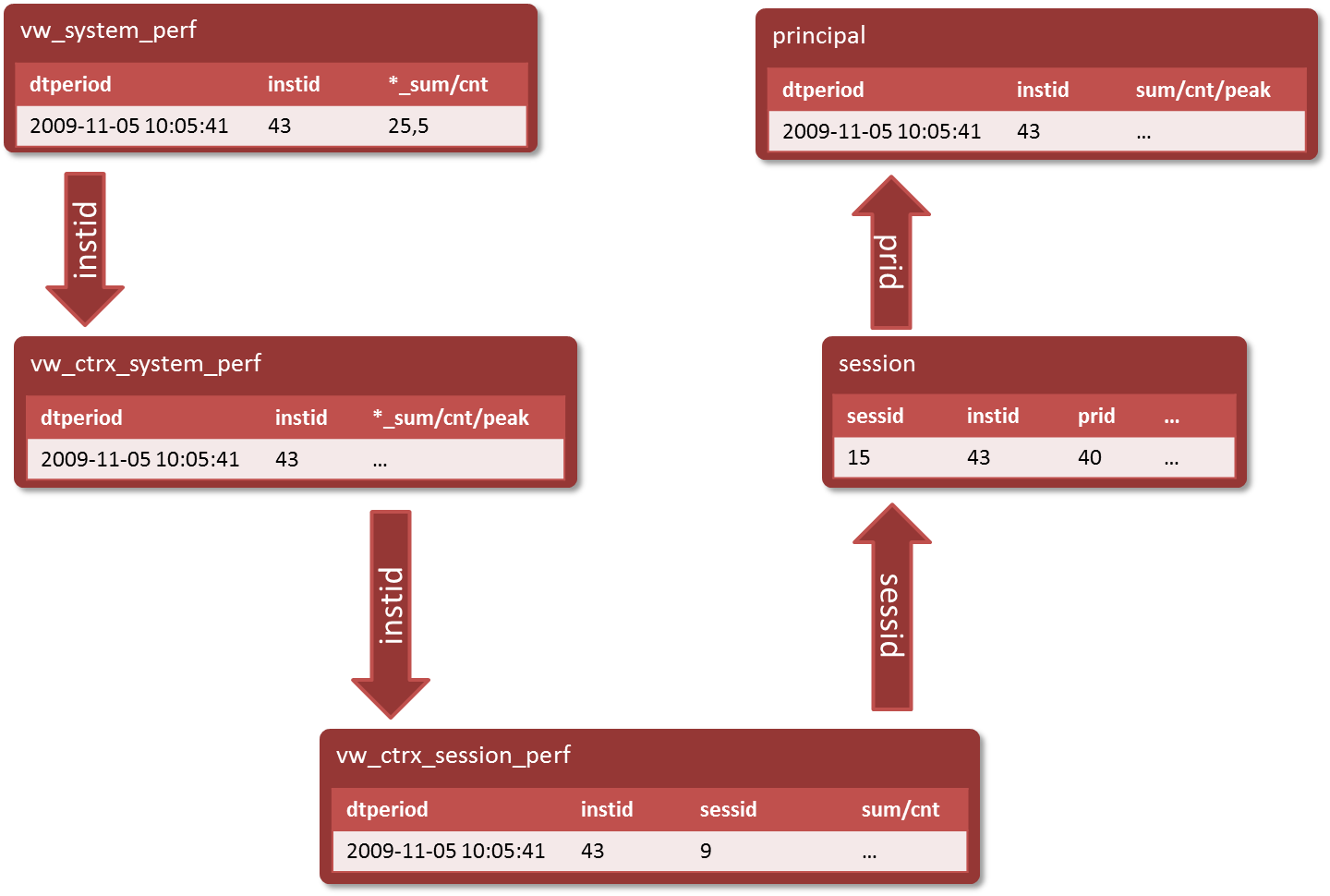 The tables session and principal are used to resolve the session if (sessid) found in vw_ctrx_system_perf and vw_ctrx_session_perf. The table session contains a list of all sessions perceived by the agents. The account information for a session is stored in the table principal being referenced by prid from the table session.

Process performance data can also be accredited to user sessions by resolving the field sessid in vw_image_perf and vw_ctrx_session_perf.

As all data items stored in the EdgeSight database are expressed in UTC, the table rs_calendar supports handling date and time values. It contains a list of all years, months, days and hours nearly since the beginning of time ;-) Although all data found in this table can be calculated on-the-fly, it is way faster to read it from a table.

In the next article, I will demonstrate building a query based on these tables.